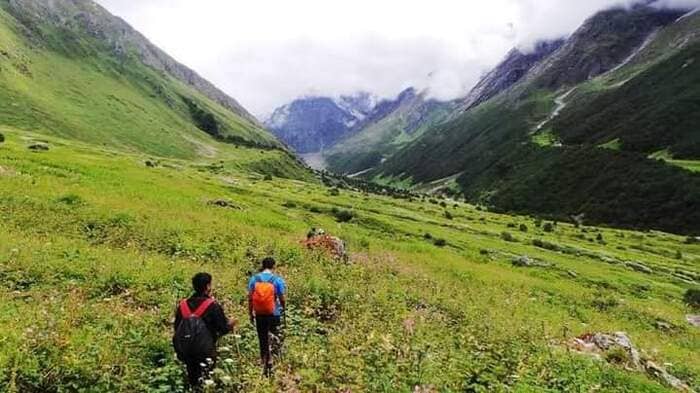 Valley of Flowers "Foolon ki Ghati" is one of those beautiful trekking expeditions that can be enjoyed during the monsoon season. it is India's most beautiful trek in the Himalayas. It is flawlessly nestled in the West Himalayan region of Uttarakhand and lies at a lofty height of 3600 m above sea level. Valley of flowers is famous for its colorful and Variant flowers which makes the beautiful scenic & mesmerizing view all covered with flowers. Valley of Flowers is having 500+ species of flowers and is well known for the Braham Kamal, which is found as the rarest flower and can see in the highest areas of the Himalayas. The hidden lake at the height of 14,400 ft., creates a hidden coop for numerous species of wildflowers like the saxifrages, sedums, lilies, poppy, calendulas, daisies, geranium, zinnia, and petunia.

Geographical Details -
Spread over an area of 87 sq km in the Chamoli district, the Valley of Flowers National Park is a UNESCO World Heritage Site and forms one of the two core zones (The other being the Nanda Devi National Park) of the Nanda Devi Biosphere Reserve. Valley of Flowers is an Indian national park that was established in 1982 and it is the world's heritage site declared by UNESCO in 2005. The valley is believed to have been discovered in 1931 when three British mountaineers led by Frank Smythe; lost their way and chanced upon this spectacular valley. Attracted by the beauty of this place they named it the “Valley of Flowers”.
The Valley of Flowers has nestled in the "Pushpawati river valley" which is in the upper expanses of the Bhyundar Ganga river near Joshimath in the Garhwal region. The lower reaches of Bhyundar Ganga near Gobindghat are known as "Bhyundar Valley".

The Attraction Place of this trek -


Time for trek Valley of Flowers -

The Valley of Flowers trek opens on July 1 with the permission of the state government and remains open till October. The best time to visit is between July and early September, when the valley is full of flowers, just after the outbreak of monsoon.

Valley of Flower & Hemkund Sahib Trek Price :
(6 days & 5 Nights)
We start our journey from Haridwar, which is well-known as the holy city of Uttarakhand. This is simply: Haridwar → Govind Ghat → Ghangharia → Valley of Flower → Hemkund Shahib → Ghangharia → Govind Ghat → Haridwar
Packages start from - Rs. 8,999 Per Person (Including Accommodation and Meal + Transport) + 18% GST

Some key Points to be Noted -

Q.1 Is there lot's of flowers?

yes there are, but not rose and lily there will be the flower of the upper Himalayas region

Q.2 Can we stay there in National Park Valley of Flower?

No you can't camp there, or can't stay cause it's not permitted by govt of uttarakhand there.