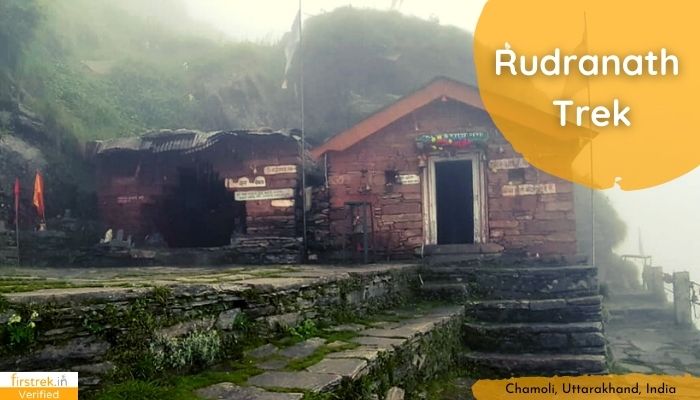 Rudranath trek - is a Hindu temple dedicated to God Shiva, located in the Garhwal Himalayan Range in Chamoli Uttarakhand, India. Located at 3,600 meters (11,800 ft) above sea level, it is also considered the toughest Kedar out of the five. It is a natural rock temple situated within a dense forest of rhododendron dwarfs and Alpine pastures. The temple is the Fourth temple in the Panch Kedar pilgrimage circuit. Only in this temple, you can see the face of lord shiva. it is believed that lord Shiva resides here in his most vigorous form and every year thousand of devotees come here to perform rituals and worship the almighty. Apart from its religious popularity, this trek is a breathtaking adventure for trek lovers.
The face (Mukha) of God Shiva is worshipped as "Neelakantha Mahadeva" here. The trek starts from Sagar Village which is approximately 5 km away from Gopeshwar. The other trek starts from Mandal which is 12 km away from Gopeshwar. This trek goes through the Anusuya Devi Temple. The trek is very hard with a distance of approximately 24 km.

The history of Rudranath Temple -
The Rudranath Temple is believed to be established by the Pandavas, the heroes of the Hindu epic Mahabharata. The Pandavas defeated and slayed their cousins — the Kauravas in the epic Kurukshetra war. They wished to atone for the sins of committing fratricide (gotra hatya) and Brāhmanahatya (killing of Brahmins; the priest class) during the war. Thus, they handed over the reins of their kingdom to their kin and left in search of lord Shiva to seek his blessings. But Lord Shiva didn’t appear in front of pandwas. Shiva kept running away from Pandavas. Shiva disappeared into the ground to later reappear in parts, with the hump appearing in Kedarnath, the arms appearing in Tungnath, the face appearing at Rudranath, the nabhi (navel) and stomach appearing in Madhyamaheshwar and the hair appearing in Kalpeshwar. The Pandavas pleased with this reappearance in five different forms, built temples at the five places for venerating and worshipping Shiva. The Pandavas was thus freed from their sins.

The Key highlight of Rudranath trek -

Some believe that offering a pind to ancestors here equals offering a hundred million at the holy city of Gaya. The name "Rudranath", literally means, "Him who is Angry." The mountain cave of Rudranath was modified into the temple we see today. There are different kunds nearby the temple which are Surya Kund, Chandra Kund, Tara Kund, Manas Kund, Vaitarani, Baitarani, and Rudraganga Rivers. Rudranath temple is open only for 6 months ( May to October). In the winter season, it Comes to Gopinath temple Gopeshwar.

The Best time to visit this trek :
1. Mid-May to Mid-June.
2. Mid-July to October. (This time the whole trek is full of many flowers)

We start our journey from Rishikesh, which is well-known as a holy place in Uttarakhand. This is simply Rishikesh - Gopeshwar town - Rudranath trek & temple -Rishikesh.
Packages start from - INR. 7,499 Per Person (Including Accommodation and Meal + Transport) + 18% GST

Some key Points to be Noted -

Q.1 What is the best time to go for Rudranath?

Looking for a peaceful and adventurous journey towards Himalayas, it is best trek to visit in March to May and June to October. You will get to see snow capped mountains throughout the year.

Q.2 What is the Distance between Rishikesh to Gopeshwar ?

The distance between Rishikesh (Yoga Capital) to gopeshwar will be around 200km.

Q.3 Near by place to travel in Rudranath Trek?

Ansuya devi temple is the most famous temple in the uttrakhand , its the best place to visit this place via mandal . The temple of Ansuya Devi is dedicated to goddess Sati . Sati Ansuya wife of the great rishi Atri Muni , Ansuya mata mandir is located an elevation of 2100 height frm the sea level in gopeshwar chamoli .

Great experience with firstrek. nice and cooperative team. this trek is so beautiful, awesome sceneries , the fields of grass and full of flowers.

Rudraprayag is the confluence of 2 rivers Alaknanda and Mandakini, both tributaries of Ganga. Rudranath is a temple, which is a part of the Panch Kedar circuit. There are 3 ways to reach Rudranath temple: A> From Kalpeshwar temple/ Devgram, it is a 12 km trek to Dumak, another 13 km trek to Panar and final 8 km trek to Rudranath B> It is also possible to reach from Saggar, on the Kund-Chopta-Mandal-Saggar-Gopeshwar-Chamoli Road. From Saggar it is 12 km to Panar and then final 8 km to Rudranath (via Pitradhar and Panch Ganga). This route is very tough through a dense forest. But climbing up may be slightly better option than coming down from here. There are quite a few dhabas on this route. These dhabas provide good food and basic overnight staying facilities and enclosed toilets. On the way we hear the chirping of birds, noise of the crickets and cicadas, rustling of leaves by the langurs. The gurgling waterfalls add to the surreal experience. Drinking water directly from the fresh water streams is rejuvenating. The 360 degree Himalayan view from Panar will remain etched in my memory forever. The elegant Monal bird and grazing cattle add to the beauty. Pitradhar is a place where our forefathers are said to have departed for the other realms. There is a small unattended shrine here. C> Again on the Kund-Chopta-Mandal-Saggar-Gopeshwar-Chamoli Road, one can climb from Mandal. This is 5 km trek to Anusuya Devi temple and another 11 km trek to Panch Ganga and final 3 km to Rudranath temple. After Anusuya Devi, this track is isolated. But this route is good for trekking down, through the Naola pass which is around 14,000 ft above MSL. It is unique sight to see mountain goats on precarious slopes. We even sight a viper snake. We did have to cross a knee-deep Ganga tributary, as a bridge was broken. The view from Rudranath temple is stupendous. We see a wide range of icy Himalayan mountain peaks. Nanda Devi and Kamet peaks look very enticing, specially at sunrise. Taking a guide along for the entire Rudranath trip is highly recommended, as it is the toughest trek a pilgrim may ever do!

Named after Lord Shiva (Rudra), Rudraprayag is situated at the holy confluence of Alaknanda and Mandakini rivers, at a distance of 34 km from Srinagar (Garhwal). Rudra Prayag is a small town that is located in the state of Uttarakhand and in the district of Rudraprayag. The town is situated at the confluence of the River Alaknanda and River Mandakini. It has a special religious significance for many people as well. It is said that the place where the two rivers meet resembles two sisters embracing each other and there is a unique beauty about the place. Many visitors travel to the place to witness this phenomenon every year. The entire area is surrounded by immense beauty and one can see many lakes, glaciers, rivers and streams here. There are a few temples that are located in the town as well and these are a must visit while travelling to Rudra Prayag City Facts State: Uttarakhand District: Rudra Prayag Famous for/as: Pilgrim Languages: Hindi Best Season: Oct - Mar Weather: Summer 22 to 35°C Winter: 15 to 25°C Altitude: 895 m Pincode: 246174 STD code: 01364 Distances Delhi to Rudra Prayag: 357 km Chandigarh to Rudra Prayag: 359 km Rishikesh to Rudra Prayag: 150 km Corbett National Park to Rudra Prayag: 163 km Haridwar to Rudra Prayag: 171 km The climate of the town is pleasant for many months of the year, especially during the summer season and this is one of the best times to visit the place. The heat is never extreme in the town

Rudranath is 4th place of Panch Kedar Darshan after kedarnath/MadhyaMaheshwar/Tunganath. It is one of the toughest trek of all Kedar where Face of Lord Shiva is worshiped. There exist 3 route to reach Rudranath. 1. Gopeshwar- Saggar(by vehicle 4 Km) - (By trek) 18 Km Paner- Rudranath. 2. Urgam - Devgram-Dhakwani_ Paner- Rudranath. 3. Mandal- Anasuya Devi- panchganga-rudranath, Of all the three route, only route-1, one can go without Guide. Route-2 is very narrow route and steep not frequented by pilgrimage. route -3 is longer and need min 4 days from Urgam. But Kalpeshwar Mahadev the 5th Panch Kedar is near by just 1 Km from URgam by road. After scanning few details, reached Gopeshwar on 2nd Morning at 10 AM, dumped the excess luggage in GMVNL guest house which just front on main bus stand. With few warm cloth and other thing we took an vehicle up to the Saggar village it is just 3 Km from Gopeshwar. started tredk at 10:30 AM. The starting point is near Hotel Rudra on Main road and is well demarcated by Welcome Mantap. This is the route to be followed for Ustav moorti during opening and closing. It is exactly 18 Km from this point up to Rudranath Temple. The first 1.5 Km is going through Village/ Agricultural Field with moderate gradient and paved with concrete. At 1.5 Km there is a shop for juice/ Tea/ Biscuts etc. one can take rest here for a while. For normal person it takes about 1.5 hrs to reach here. From here upto Pana Bugyal is approx 1 Km and road is unpaved and un even. and gradient keep increasing. with bush on either side. By the time we reached Pana Bugyal it was around 12 30PM, There is a tent shed/ accommodation for night stay is available. (Rs 300 /head ) From here steep gradient starts and road is full of un